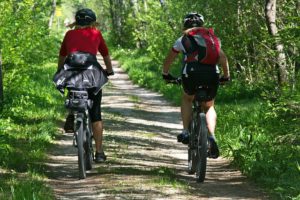 Tour the wonderful canyons, meadows, hilltop villages and peaks that reveal their past, by bike. 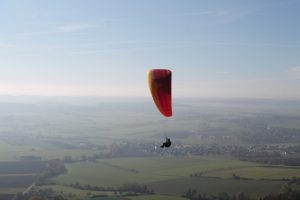 Raspadalica lies about 5 km north of Buzet. This equipped site is ideal for hang gliding and paragliding almost all year round. 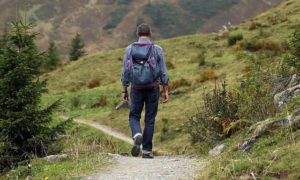 Hiking and mountaineering are becoming increasingly popular in Buzeština. Proof of this is the section of the Mountaineering Association “Planik” from Umag which was founded in Buzet with an increasing number of members.

Mountaineers and recreationists have at their disposal the  mountaineering trails: 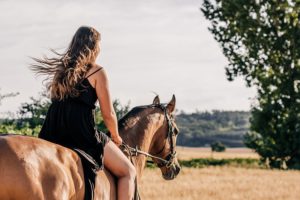 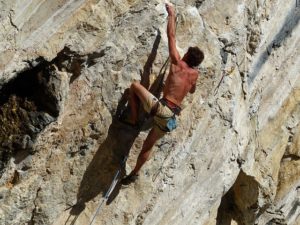 You can find next climbing sites on our region:

Mlini source is a cave system with a water channel 450 m long.
Duration: 4 hours.
Pit near Slum, has a vertical entrance and you can descend to a depth of 60 m.
During the first part of the day participants learn about the practical part of use of equipment, whereas the afternoon is reserved for entering the pit.
Duration: whole day
For a top caving adventure of Buzeština and Ćićarija contact:
Nevio Ladavac, GSM: 00385 (0) 98 924 73 00, nevio.ladavac@pu.t-com.hr

The activities of the Sports fishing association “Mrena” include care about stocking with fish and preserving the fish stock, whereas its sports activities include competitions in the country and abroad.
The price of a daily fishing permit is 60.00 kn. Tel. 00 385 (0) 91 737 85 29

Biska is a homemade brandy which is prepared from grape brandy, white mistletoe and four types of herbs. The recipe is about 2000 years old. It is a remainder of Druid magic of ancient Celts who once inhabited these parts. White mistletoe (viscum album) was a cultic plant of ancient Celts. Biska is famous for its medicinal properties, it is one of the best natural cures for arteriosclerosis and for regulating high and low blood pressure. Only Humska konoba (Hum Tavern) knows the recipe for its production, which was given by the late Hum priest (Josip Vidou) who was a famous herbalist. You can taste biska at Humska konoba in Hum – the smallest town in the world. Besides being famous as the smallest town in the world, Hum also promotes itself as the Town of Biska.

Truffles are a group of underground fungi with a very specific taste, which are considered the ultimate in gastronomy. They grow in the very heart of Istria, in the damp and grey soil of the forests near Buzet, close to the Mirna river. This hidden treasure is found with the help of specially trained dogs. The area that is rich in truffles is in the northwest to Buzet and Lanišæe to the Raša river in the area of Labin and south to Pazin. In the valley of the Mirna river the highly-prized and world-known white truffles are harvested in early autumn, as are black truffles found both in winter and summer. 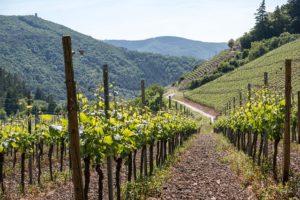 The interior of Istria, with its hills where the red soil becomes grey, white, clayish is famous for its red Teran and golden Malvasia.

Wine producers on the roads of Buzeština 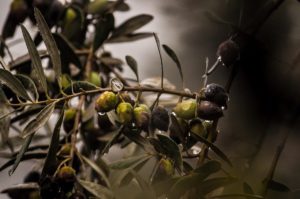 On the olive oil routes of Buzeština you will find the following producers of quality olive oil:

A significant and exceptional monument complex commemorating Glagolitic heritage was erected in 1977 along the road from Roč to Hum. The Glagolitic Lane is a project of the Chakavian Parliament (Čakavski sabor). The author of the entire concept is Zvane Črnja, and it was realized through the work of prof. dr. Josip Bratulić and sculptor Želimir Janeš. The beginning of the Lane is at the foot of Roč hill with the first monument – Pillar of the Chakavian Parliament. This monument in the form of the Glagolitic letter S symbolizes the first Slavic script and the beginnings of Slavic literacy. The remaining ten memorial sites are: Table of Cyril and Methodius, Chair of Kliment of Ohrid, Belvedere of Gregory of Nin, Glagolitic Lapidarium, Gorge of the Croatian Lucidar, Gradient of the Survey of Istrian Land Boundaries, Wall of Croatian Protestants and Heretics, Resting-area of Juri the Deacon, Monument of Resistance and Freedom and Hum Gates.

Pillar of the Chakavian Parliament – a memorial-site in the shape of the glagolitic letter S which symbolizes the first Slavic script and the beginnings of the Slavic literacy.

Table of Cyril and Methodius – the name of this stone table monument is written on the rim written in Latin, Cyrillic and Glagolitic. Two cypresses are planted beside to the table symbolizing the Holy Brothers.

Glagolitic Lapidarium – a collection of copies of the oldest and most significant Glagolitic inscriptions fom Istra, the Kvarner islands and Dalmatia are built in the surrounding wall in front of the church in the village Bernobići.

Belvedere of Grgur of Nin – the Latin, Glagolitic and Cyrillic alphabets are inscribed on the stone block.

Wall of the Croatian Protestants and Heretics – in the centre of the stone wall, in the white stone block, the Galgolitic letter S is inscribed whereas in its upper part are names of famous Croatian protestants and heretics. Quotations from their works are inscribed in the seven stone slabs.

Resting-place of Juri the Deacon – dedicated to Juri the Deacon, an Istrian Galgolite who helped prepare the printing of the first Croatian printed book Missal from 1483. He enthusiastically announced it in Duke Novak’s Missal (written in 1386) with words which are inscribed in the stone wall (in the shape of a book). The seven stone cubes resemble matrixes for hand typesetting while the letters on them spell: Žakn Juri (Juri the Deacon).

Monument to Resistance and Freedom – it consists of three stone blocks, one above the other. Each block symbolizes a particular historic period: the ancient world, the Middle Ages and the modern world. They symbolize the resistance of the people of Hum and its area against tyranny and banishment as well as their aspiration to peace and freedom throughout the ages.

Gate of Hum – made of copper hand-holds in the shape of ox’s horns, the two door knockers bear welcome inscriptions. There is a peasant’s calendar – twelve medallions with scenes of rural life – placed semi-circularly in the upper part of the gate.

«The overgrown Town» is history full of legends and oral traditions. The castle served for the surveillance of the valley of the River Mirna and the central Istria for the Aquileian patriarchs in the Middle Ages and for the Venetians in the 15th century. Petrapilosa Castle lies 6 km west of Buzet, close to the road along the Mirna river in the direction of Livade or Motovun. This medieval castle is situated on a high cliff that dominates the entire area of the Braèana river. For centuries it held an excellent military and defensive position from which all movements through the field or along the road could be controlled. The fortification Ruin was first mentioned in written documents as early as the 10th century. Mass was celebrated for the last time in the castle chapel of St. Mary Magdalene in 1793, even though the entire complex had been abandoned long before. After the restoration work began in the chapel in 1999, numerous remains of medieval frescoes have been found. Today they are displayed in the Regional Museum in Buzet.

The smallest town in the world.

Founded as an Illyirian settlement, it grew into a Roman castrum.  Roč was the centre of Croatian literacy, editorship, and printing based on the oldest Slavic Glagolitic Alphabet.

The settlement goes down the slope of the hill towards the south, it has two town gates, four squares connected by three main roads, while the square with the parochial church is built on the rock.